skip to main | skip to sidebar

The new Adventure has Started!!!

I made this widget at MyFlashFetish.com.

today was one of those days where you share a moment with fellow Canadians and stand together proud!  We joined with many others today to watch the Olympic torch being relayed through ski country! 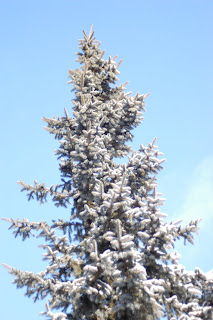 The weather today was freezing cole.  The thermometer dipped to -14 celcius with a wind howling at 40-45 k/hr, it felt like it was -30!  We bundled up like true winter people should and made our way to the relay route.  As we headed out we were the only people walking down the road, cars driving the road were looking at us like we were nuts as the wind blew our pom-poms back and the snow blew up a white out!   We looked at each other and asked ourselves a couple of times if we were heading to the right place.  Finally after a we turned a corner onto a main road we saw an 2010 Olympic van parked on the side of the road.  We walked along to the van as more people started to gather.  By the time we got to the van, it was actually busy enough to be called a crowd.  Down both side of the road people were 3-4 deep.  Kids were bundled up like marshmellows, parents with scarves over their face, people bundled like proud Canadians should b to enjoy a part of Canadian history.

After a while longer standing and shivering flashing lights came over the hill, following behind was a another half dozen vehicles with lights and sponsor logos. As they approached they came to a stop near us.  A young lady jumped out of the original van that we saw and was handed an unlit torch.  Another couple of people jumped out of another vehicles with a small lantern, the lantern had the 'official' Olympic flame.  People crowded around as the your girl and 2 people came to meet.    It was a very cool thing to watch, the young girl has a smile on face her that was more absolutely lighting the day.  People were crowding around to watch as her moment in history was started as the flame was officially lit.
To have the opportunity to carry the flame was accomplished by writing as essay.  This young girl had taken time to write about why she as a Canadian should have a moment to carry Canadian history.  Itt was a great thing to see.  As the flame was lit she bounded into the air with joy and pride.  The crown cheered as she smiled and waved to all the proud Canadians around her cheered and enjoyed a brief moment in our history.  She started her jog along the road as people took photos, waved flags and cheered.
I personally thought it would be a truly cheesy moment, one where you take photos and file them to never talk about it again.  I was very wrong.  As I gathered to take photos and watched as the excitement in the crowd built up, I got caught up in the moment.  I took photos and took in every moment as a very proud Canadian, I had shovers down my back is she ran past me with the smile continually growing!  I have to day that it was a moment that I will share with my friends and remember for a long time to come!
I look forward to Canada's moment on the world stage as an Olympic host!
As the weather was cold enough to ' freeze the b%%$ of a brass monkey' skiing was a cool thing today. It is always cool, but today literally as well!  I went out for an hour before some friends called to tell us the had arrived.  Once in a while a break off the hill is a joy.  I had one  of those days!  A few hard core runs enjoying the new snow and then out for some fun!
As you can probably determine by now, no workout today!  I am not panicking about missing workouts right now.  I am skiing my butt off and eating well.  The New Year will be the beginning of a long journey, a couple of days off right now will not kill me!  I hope you have had an awesome day and are getting excited for the start of a New year!  Cheers!
Posted by skierz at 4:31 PM

I am proud to be supported by hte following companies in my quest. please click link to visit they awesome products that they have!

skierz
Mississauga, Ontario, Canada
Enjoying life and fulfiling the dreams that I thought were not reachable. Living and playing with friends and family and enjoying a healthy life to its fullest! AND having a lot of fun along the way!

Blog's I am Following